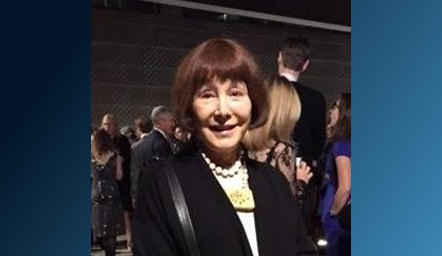 Learn more about bequests
"I feel you have to give back to an institution that prepared you. Education is not just about getting a better job. It connects you to society. What do we leave behind? That is what matters."
~ Eve Heyman Masonek

"My life experience is that of a foreigner, an immigrant," Eve Heyman Masonek explains, "I was born in Transylvania, a region that had been part of the Austro-Hungarian Empire, and Hungarian was my first language." When the Empire was broken up through post-WWI treaties, Transylvania was annexed into Romania. Eve remembers, "I was punished severely in school for speaking even a word of Hungarian." Already a resilient survivor and fighter, Eve avoided getting her hands whacked hard by the teacher's ruler by summoning every bit of French and German she knew while she learned Romanian, but fast.

Pre-WWII chaos engulfed Eastern Europe, and in late November 1938 Eve's family had to leave. "By then it was almost impossible for Jewish people to leave," Eve explains, "My father was a very well-regarded radiologist who had been trained at the Sorbonne in Paris, under Marie Curie. We obtained visas for the United States through past connections. It was a miracle! We were forbidden to take money out of Romania. So, my father decided that he might as well spend it. Besides tickets to Paris, he had arranged our stay there and bought tickets to New York on one of the last sailings of the Queen Mary."

Fast forward a few more moves, Eve was completing her first year of college at the University of Oklahoma in Norman WWII ended, her father headed back to New York and his practice, and Eve was free to decide where she would complete her education. She had had a chance to visit Los Angeles where her sister was living and loved the UCLA campus.

"I was accepted at UCLA," Eve remembers, "It was a great time to be studying. We had very good professors, and we knew we had a future." Eve majored in political science. Later, she obtained teaching credentials. On campus, she also met her future husband, Sam Heyman, a Gl who had been wounded in the Pacific.

After teaching in the Los Angeles Public School system for five years, Eve joined the furniture business her husband, a man with a gift for design, had created. She also pursued her passion for art by taking classes through UCLA Extension, going to student exhibits and buying the very first pieces of what was to become a remarkable life collection.

Hardship and sadness struck again when Eve's husband, Sam, took ill and passed away. Eve kept on working and endured into her life's next chapter. Eventually, she met and remarried an old college friend, Harvey Masonek, and moved to San Francisco. "Life is rarely just smooth sailing," Eve says, "But I was very lucky, I had a second good marriage for 27 years. In San Francisco, I reconnected with my love of teaching and my passion for art by becoming a docent at the Museum of Modern Art. Something I'm still doing today."

"It was at that time, that I read UCLA Professor Jared Diamond's book, Guns, Germs and Steel," Eve remembers. She thought the study of what affects the course of human history was so important that she began to make philanthropic gifts in support of his work. Professor Diamond acknowledged Eve's generous support for his studies in his second major publication, Collapse, in which he explores why some societies fail and perish while others succeed.

Eve connected these ideas to a time when she had traveled to Berlin's Pergamon Museum and viewed the reconstruction of the Ishtar Gate, a monumental work of Babylonian architecture. "This was the work of a great civilization who built to have a presence in the future. Yes, it was destroyed, but it did not disappear. Enough was left behind that it could be rebuilt and live on. This idea of having a vision of the future, building what you are going to leave behind is essential," Eve continues, "We are now at a pivotal moment, with climate change as the central issue, and we have to decide if we are going to be future-oriented or not."

Eve ties these thoughts to her attachment to UCLA and to the motivation for her philanthropy, "I think Professor Diamond's work is essential for understanding what is at stake now. That's why I had first made a five-year commitment to support his research. More recently, I decided to expand this and set aside a sum in my estate for continued support after my lifetime."

"I am happy that my gift is connected to UCLA because education really shapes individuals and gives them resilience. I admire the university because it has so many first-generation students, and it changes their lives. I cannot imagine what life would have been like for me if I had not had education. I feel you have to give back to an institution that prepared you. Education is not just about getting a better job. It connects you to society. What do we leave behind? That is what matters."