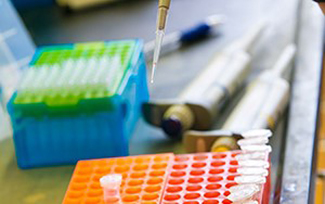 UCLA Health is one of 75 sites around the globe participating in a clinical trial sponsored by the National Institutes of Health to test the effectiveness of a candidate anti-viral drug against COVID-19.

The drug, called remdesivir, was originally developed as a treatment for Ebolavirus. Although found to be safe, it was not effective in treating those patients. However, in laboratory tests it appears to work against the SARS-CoV-2, raising hope for its efficacy against COVID-19. This evidence has initiated formal investigations into the efficacy of the drug, such as the one launched by the NIH through its National Institute of Allergy and Infectious Diseases. UCLA, an academic medical center at the forefront of health research, is part of this and trials of other drugs to fight the virus, with others potentially launching soon.

Dr. Otto Yang, professor of medicine, division of infectious diseases, at the David Geffen School of Medicine at UCLA, is leading this trial, with substantial support from the UCLA Clinical and Translational Science Institute. "Remdesivir is a drug that has good activity against the virus in lab experiments, and it seems to effectively treat similar viruses in animals," said Yang, who is also a professor of microbiology, immunology & molecular genetics at the Geffen School. "We don't know yet whether it is effective in humans with COVID-19 so it is undergoing clinical tests in patients."

This is only one of several trials of different agents to use against the disease that are under investigation at UCLA, said Dr. Judith Currier, chief of the UCLA Division of Infectious Diseases at the Geffen School. "There are several more trials expected soon as we work to evaluate promising therapies including biologics, antivirals and immune-based treatments for people with different stages of COVID disease," Currier said. 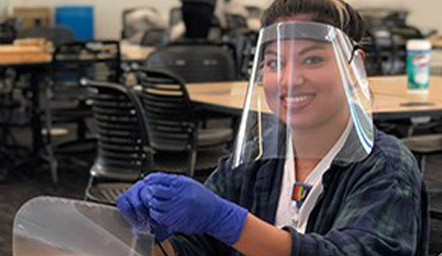 Hospitals across the country are facing a shortage of medical-grade personal protective equipment, and manufacturers haven't been able to meet the rising demand with high-quality solutions.

In response, bioengineers from the UCLA School of Dentistry and UCLA Samueli School of Engineering have taken to their computers and 3D printers and developed a reusable, durable face shield--a critical piece of equipment that protects the eyes, nose and mouth from infection-causing droplets. The prototype was reviewed and approved by UCLA Health, and the design has been shared on the National Institutes of Health's 3D Print Exchange.

The device's headband can be mass-produced using 3D injection molding, while the clear plastic shield is made by laser cutting. The first batch of face shields will go to UCLA Health; the engineers say that as many as 25,000 high-quality headbands can be produced in a week to meet the demand. Some 50,000 plastic shields can be produced within weeks as well. The final products will be manufactured by medical device companies providing the service at cost, using facilities certified by the U.S. Food and Drug Administration.

The reusable face shield, which builds on an earlier single-use prototype made by Jacob Schmidt, a bioengineer and director of the UCLA Samueli Makerspace, is a highly scalable solution that provides more durability, splash protection, adjustability and prolonged comfort than the single-use shield. It is also compatible with most hospital-grade disinfectants.

The design and development was led by Dr. Ben Wu, a dentist-scientist who chairs the advanced prosthodontics division at the UCLA School of Dentistry and holds a joint appointment at UCLA Engineering, with support from Schmidt; Doug Daniels, emerging technologies librarian and director of the UCLA Library's Lux Lab; Wu Lab bioengineers Yun Chang Lee, Chase Linsley and Yulong Zhang; and colleagues from UCLA Health and the David Geffen School of Medicine at UCLA.

UCLA teams are working around the clock to engineer a number of highly scalable manufacturing solutions aimed at protecting these workers. Wu is leading several other interdisciplinary teams seeking to address additional PPE shortages, including N95 respirators, shields for powered air-purifying respirators, or PAPRs, and other specialized consumables critical for treating patients who have tested positive for COVID-19.

Members of the community who wish to support this effort are encouraged to consider a gift to UCLA Engineering's Problem Solvers Fund and UCLA Dentistry's iDDS Fund for Excellence. 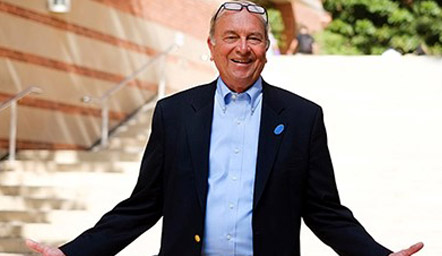 "As a human being, you've got to find a place where you can give back and make a difference, and I decided to make UCLA that place."
-Bill Cockrum

Bill Cockrum's relationship with the UCLA Anderson community began when he recruited its students, during his 25 years in the financial services industry. Eventually, now Senior Associate Dean and then professor Al Osborne approached him about teaching a course on entrepreneurship. "I said I'd try it," Cockrum remembers. "So, we put together a course in entrepreneurial finance and piloted it in the winter of '85."

Bill Cockrum was born during the Great Depression. World War II and the Korean War helped define his formative years. "Half my college fraternity fought in Korea," Cockrum says. "It was just different. My generation matured a lot earlier and had a different economic outlook than today's students have." Upon graduation from Harvard Business School, he joined an investment bank in Chicago. He headed investment banking for five years, advised clients and became the chief financial and administrative officer, one of the six top officers of a 3,000-person organization. Cockrum's career took off. Eventually, he started his teaching contribution to UCLA Anderson.

"It turned out that I liked the people here," Cockrum says. "The community was accepting, and there was a need for instructors who could translate academic theory into practice, sharing examples from their own experience." The school asked Cockrum if he would continue on a full-time basis. Cockrum recalls his reaction. "I said to myself, 'Look, I've accumulated capital, I've got things pretty well organized, my consulting business is doing fine and my family is taken care of.'" He's now Adjunct Professor Bill Cockrum, award-winning teacher, mentor, advisor and friend to generations of UCLA Anderson students. His interest in students, their careers and their studies, is legendary.

Cockrum later made the momentous decision to pay back the salary he'd earned at Anderson. Since then, he has continued to invest in UCLA Anderson in just about every way possible. He explains, "It didn't make sense, if I were going to give back and try to make a difference, to get paid for doing that. I've done more than I expected, and I've certainly received a lot more than I expected as well."

Cockrum now plans to leave the school an estimated $30 million future gift through his estate to establish the Cockrum Fellowships, which will help students defray the cost of tuition while fostering a culture of giving back. He hopes that this will similarly inspire others to include UCLA Anderson in their estate plans as well. "The net of it all is that when I leave here and eventually pass away, the world is going to be better, not because of what I did, but because of the more than 8,000 students whom I've taught here, what they're doing in the world and how they are going to improve it." 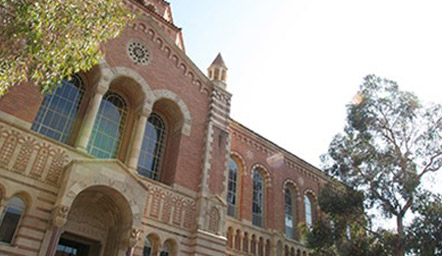 Please contact UCLA's Gift Planning team at 800-737-8252 or at giftplanning@support.ucla.edu for sample bequest language or with any questions you may have.
Learn more about bequests

The Lasting Impact of a Gift to UCLA

Many friends and alumni are choosing to support UCLA and its mission to serve local and global communities with a gift through their will or living trust. This giving option gives donors the immediate satisfaction of having a lasting impact and costs nothing now.

You can make a gift to the university through your will, living trust, or other estate plans, using what is left after gifts to family and others have been fulfilled. You may provide a specific amount, a percentage, or the entire remainder of your estate as a future gift to UCLA.

Another convenient way to make a provision for UCLA through your will or trust is to include a gift of a specific asset or property. Securities, real estate and personal property can all be given through a will or trust. 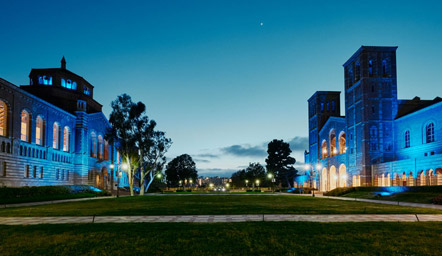 If you are interested in learning more about any of these ideas, please contact the Office of Gift Planning at giftplanning@support.ucla.edu or 800-737-8252. Please also let us know how we can help you during this time.

Congress recently passed the Coronavirus Aid, Relief, and Economic Security Act (CARES Act) that includes several charitable tax provisions to encourage giving. Below is a summary of these new tax law changes and some ideas to consider with your tax and philanthropic planning in 2020:

If you have a Donor Advised Fund (DAF) and wish to support UCLA this year, you can make a gift from your DAF without affecting your personal financial security.

If you are concerned about your financial security given the ups and downs of the stock market, you may want to consider making a gift to fund a charitable gift annuity. You can exchange your low-performing stock, CDs or cash for guaranteed, fixed, lifetime payments. If you make a gift of an appreciated asset, you will reduce capital gains tax. You may also benefit from a tax deduction this year, and a portion of your payments could be tax-free.

The CARES Act waives the required minimum distribution (RMD) in 2020 for qualified retirement accounts. However, an ongoing option for philanthropic giving exists for donors age 70 ½ and older to make a qualified charitable distribution (QCD) from their IRA. 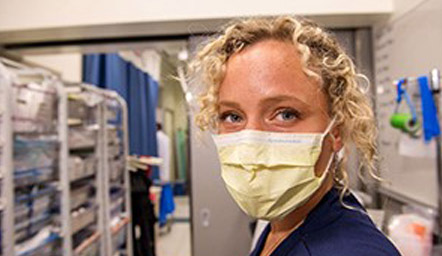 Our campus leadership, healthcare staff, and Bruin community are showing what is possible when we come together. UCLA Health has created special funds to support patient care, research and education, or the need for personal protection equipment (PPE). If you would like to learn how you can help the incredible efforts going on at UCLA Health, please click here. 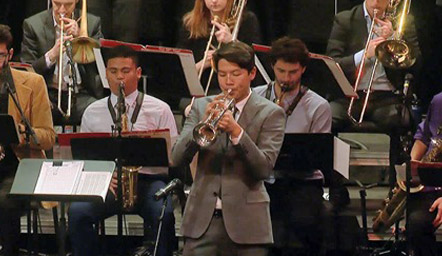 UCLA Jazz Orchestra Performs for You

Finally, we have something to help you kick up your heels?a virtual performance of Joe Henderson's "The Kicker" by the UCLA Jazz Orchestra. Enjoy! Click here to play.