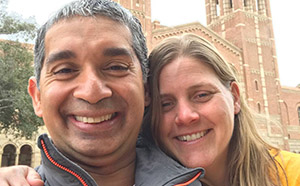 Nicole '95 and Murshed Zaheed '96
Learn more about bequests
We agreed we had reached a position of privilege because of the start we both got. We are both the successful result of the California public education system. We wanted to acknowledge this, and do something with it. And UCLA was an obvious choice."
--Nicole and Murshed Zaheed

In 1992, new undergrads Murshed and Nicole moved into the recently built Sunset Village dorms on the same day and happened to be at the nearby Puzzles Cafe at the same time. They met and became friends.

Though Nicole came from close-by Oxnard, UCLA felt like a different world. "I chose UCLA because it was 'the big school' closest to where I grew up, but I felt overwhelmed by the size of my first class—it seemed larger than my high school graduating cohort," Nicole laughs, "And there were so many classes I could take, so many opportunities. It opened my eyes to all the possibilities life really has."

Murshed was a world away, in his native Bangladesh, the first time he heard of UCLA. He was 13, and a visiting relative had brought him a blue and gold T-shirt with a goofy Joe Bruin on it. The colors matched the ones of his favorite soccer team. The gift was a hit. He would remember those four letters.

In 1988, Murshed's family moved to Riverside County. By then, he had lived in several foreign countries and had devised that a good way to learn about a new culture was to learn about its sports. UCLA had a really good football team, under Troy Aikman, and that caught his attention. "I read more about UCLA, found out about John Wooden and Kareem Abdul-Jabbar and Jackie Robinson, and I became a fan."

When time came for college plans, he remembers, "I had realized UCLA was also an amazing school, and I asked a relative about applying. I was told to be realistic and shoot a little lower, but two years later I visited campus, and felt this was the place; I was going to be a Bruin."

And a Bruin he became. "I was a biology major and pre-med at first. In that era, when South Asian kids got into UCLA, parents would say, 'you can become anything you want in this world, so you can be a doctor or an engineer,'" Murshed laughs, "But I soon realized I was really interested in politics, communications, and government relations. So I switched and majored in Poli Sci. And," he adds proudly, "I had football season tickets for every one of my four years and also never missed a basketball game."

On her end, Nicole explored UCLA's academic opportunities and chose to study the broad field of cultural geography. At the same time, she realized she wanted to teach so she added education classes to prepare and obtain her credentials.

Murshed did take Nicole to a football game once, but she wasn't impressed. "It was a really boring game, against Stanford. I think we lost 9-3," Murshed reminisces, "But she saved the tickets from that game and mailed them to me ten years later when we were dating."

Before they dated, Nicole and Murshed each forged separate life and career paths and did not stay in touch. After graduation, she went on to start her career in education as a teacher in the L.A. Unified School District. He attended law school at Boston University and developed a career in political advocacy in Washington D.C.

"I was on the road all the time, working on campaigns from 2002 through 2004," Murshed says, "I had not been home for Christmas for a while, but that year I was finally visiting my parents. I decided to call Nicole out of the blue, on Christmas morning. I had always had a massive crush on her, and I had her home phone number memorized. We exchanged email addresses, and that's how it started. Seven months later, we were engaged. On July 4, 2005, we were on campus, in front of the fountain at Royce Hall, and she asked me to marry her."

Fast forward to 2020 and the dire circumstances of the pandemic. Nicole and Murshed decided it would be prudent to have their estate plans in place, first and foremost for their 9-year-old daughter. "As part of the process, the question of making a philanthropic gift came up," Murshed explains,

"We agreed we had reached a position of privilege because of the start we both got. We are both the successful result of the California public education system. We wanted to acknowledge this, and do something with it. And UCLA was an obvious choice.

"We decided to set aside in our estate documents a gift in support of UCLA's Alumni Scholarship Fund because we had always been impressed with the program when we were on campus. It is merit based, and these students are remarkable. We hope to have a chance to catch our breath in four or five years and fine-tune our gift a little, but for now we feel it is the best way to pay it forward, help Bruin families and students, and continue the legacy.

We live in really hard times right now. People question a lot of things. So it might sound cliché or naïve to say that some dreams do come true, but as someone who moved here at age 15, barely speaking English, and who 32 years later is able to give back, I feel I embody this idea. I wouldn't have the life I have without UCLA. In many ways, these four letters define me."