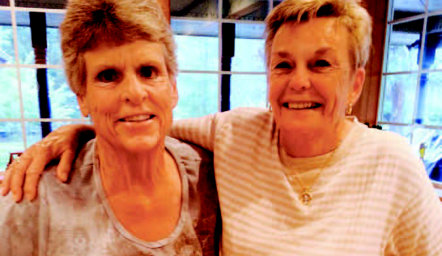 Learn more about bequests
"Our charitable remainder trusts are a great supplement to our teachers" retirement incomes, in addition to giving back and creating an educational opportunity for the wonderful students and women athletes of UCLA."
~ Jody Chapman

In the late 1950s, when Jody Chapman was studying physical education at UCLA, women could use the gym to practice and learn what contributes to positive athletic performance, but there were no women athletic teams. Title IX, the federal law that broke down barriers for girls and women in education, had yet to be enacted. Jody did not just witness the need for change. She lived it.

By the 1970s, Jody's partner, Sandy Small, was also experiencing the need for fairness and equality. She was teaching health education in middle schools with significant numbers of minority students. "What was always missing were qualified and experienced educators who hailed from minority groups," Sandy remembers. "Students didn't have role models with whom they could easily identify."

Always a Bruin-While Sandy was making a difference for Los Angeles-area middle-school students, Jody built her career as a college-level teacher and coach. Through the years, Jody never forgot she was a Bruin. She attended games and became a staunch supporter of UCLA Athletics. "If it starts with a U, she is interested. If a ball is also involved, she really has to watch," Sandy jokes.

Giving gives back-In the early 1990s, Jody took Bruin cheering and support to a whole new level. She established a charitable remainder trust (CRT) in support of scholarships for UCLA women student athletes. "My goal was, and still is, to fund scholarships for every women's intercollegiate team at the university," Jody explains. "At first, I knew nothing about the process of setting up the trust. It was the impact on women's athletics that captured my interest. I liked the tax benefits, but I had absolutely no idea the trust would grow into such a financial advantage for me as well as women's athletics," Jody explains.

Sandy adds: "When I saw how well Jody's trust was doing, it inspired me to establish my own, in support of scholarships for minority students at UCLA's Graduate School of Education and Information Studies," Sandy explains. "I want to provide for a more diverse access to teacher education programs, and make it financially easier for minority students to become highly qualified educators."

Not only do Jody and Sandy each enjoy the benefits of their CRTs, but they are each other's beneficiaries. "We wanted to protect each other with long-term safety and comfort," Jody explains, "We simply set out to create scholarships and give back, but these trusts have really exceeded all our expectations."