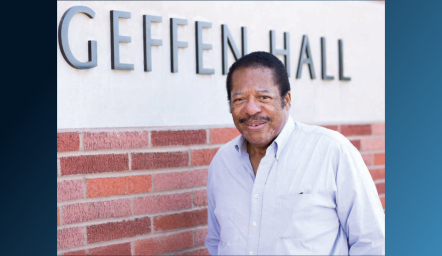 Learn more about gift annuities
"The charitable gift annuity was a win-win for me. I receive income for the rest of my life while ensuring the Physics and Biology in Medicine Inter-Departmental Graduate Program continues to provide quality education to its graduate students."
~ Dr. James A. Roseboro

In his 76 years, Dr. James A. Roseboro has packed in about five lifetimes worth of experience: civil rights activist, military officer, medical researcher, concert promoter, business owner, and even astronaut candidate. None of this would have been possible if Dr. Roseboro, who has taught courses in radiation medicine and seminars in radiation oncology physics in the Physics and Biology in Medicine Graduate Program at UCLA, did not have a strong educational foundation.

Dr. Roseboro credits his teachers at the segregated West Charlotte Senior High School for laying the foundation that would propel him toward an academic career and eventually lead him to UCLA. "I had exceptional teachers, who were all African American. Many had graduate degrees, particularly in math and the sciences," he says.

A brilliant career-The U.S. Army came calling after it read Dr. Roseboro's Johns Hopkins University M.S. thesis, the "Design and Dosimetry of a Continuous Gamma Irradiation Facility Utilizing Celsium-137," which involved simulating environmental conditions in the event of a nuclear incident. Dr. Roseboro was offered a commission in the U.S. Army, and later served in the Commissioned Corps of the United States Public Health Service for 30 years. He retired from the Commissioned Corps in 1997 as a senior regulatory research officer in the U.S. Food and Drug Administration. His work involved radiation therapy physics, diagnostic radiation physics, nuclear medicine physics, ultrasound physics, and electro-optics physics (lasers). He also taught nuclear, biological, and chemical warfare while in the military.

After receiving his doctorate from UCLA in 1975, he taught briefly at the University of North Carolina, Chapel Hill before moving on to Caltech's Jet Propulsion Laboratory (JPL) in Pasadena. There he served as a member of the technical staff, working on ultrasound technological applications and other modes of technology transfers from NASA's space exploration projects to medicine.

A legacy in support of education-Because Dr. Roseboro attributes his successes to his education, he feels that giving back is very important, "I had competing interests in wanting to provide support for a program meaningful to me, while ensuring continued income as my retirement is on the horizon," he says. Ultimately, Dr. Roseboro decided to establish a charitable gift annuity, which allows him to receive income for life with the remainder supporting UCLA.