Norman Powell has a story or two to tell about UCLA. In fact, much of his childhood memories center around UCLA — long before he attended as a student, played goalkeeper on the soccer team, or graduated from the university as an Earth physics major in 1959.

"I basically grew up at UCLA," he says, recalling memories of how his father, longtime University Librarian Lawrence Clark Powell, would bring him to the office on Saturdays, where he explored the campus and the Library. "I didn't follow my father into library work, but I have a deep appreciation for what libraries provide to scholars and the public," says Norman, who worked as a geophysical field engineer, petroleum research physicist and exploration consultant before retiring in 1990.

A simple approach to philanthropy - To honor his father's legacy and ensure that UCLA's library system remains one of the best in the nation, Norman has been a donor to the UCLA Library for many years. His gift arrangement of choice: charitable gift annuities.

"I'm a big fan of charitable gift annuities. I started with a broad perspective of viewing a gift annuity as an investment, but was pleased to see how much it helps the university."

Norman established a charitable gift annuity each year for nine years, with gifts supporting the Library and the Mattel Children's Hospital UCLA. He even set up an annuity to provide a lifelong friend with extra retirement income.

"UCLA annuities provide me with enough income to live on comfortably and enjoy the income tax benefits of a charitable gift deduction and a significant amount of tax exempt income," Norman says.

A commitment to giving - In 2016, Norman set up a new gift annuity, and also made the decision to commit an additional gift through his estate plans. Coinciding with the Centennial Campaign for UCLA, this combination of gifts is to endow the position of University Librarian, named the Norman and Armena Powell University Librarian in honor of Norman and his late wife.

There's one other aspect to giving that's important to Norman: "It's a commitment you're making for the rest of your life. You don't call UCLA and say you want your money back. It's a lifetime commitment."

For Norman, that commitment is about preserving a family legacy that began 50 years ago when the Powell Library was named in honor of his father. "It's such a warm feeling to be able to give to the UCLA Library," he says. "It's amazing how it all fits into my life'like a bookend on a bookshelf."

If you are interested in learning more about these opportunities, please contact UCLA's Gift Planning team at 800-737-8252 or at giftplanning@support.ucla.edu. Please also let us know how we can help you during this time. 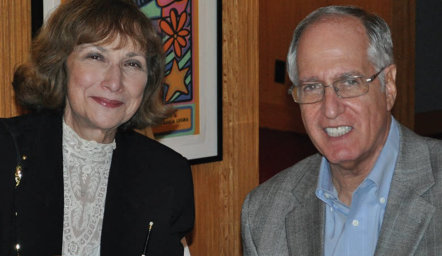 Read about why and how Marty Cooper and Barbara Roisman Cooper decided to support UCLA with a bequest. read more